Technologies implemented in the low emission concept studies of the 8,500 TEU container vessel and the 35,000 DWT bulk carrier 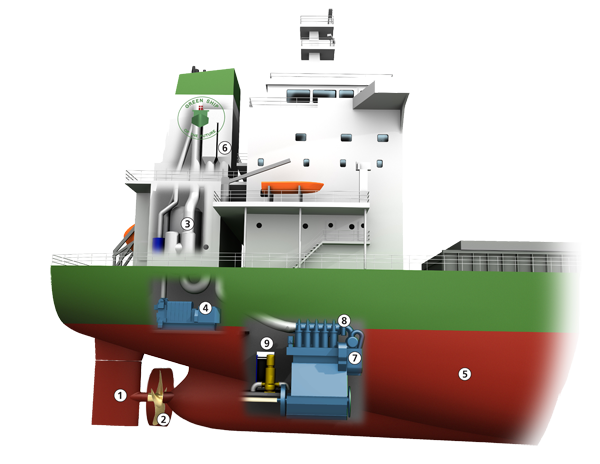 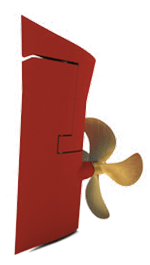 A well-designed propeller and rudder system can save up to approximately 4% of the fuel oil consumption. Such a system could be a modern propeller combined with an asymmetric rudder and a so-called Costa Bulb.

Normally, nozzles are used to improve the bollard pull on tugs, supply vessels, fishing boats and many other vessels which need high pulling power at low speed.

This new kind of nozzle, called a speed nozzle, is developed to improve the propulsion power at service speed. Using the new speed nozzle concept has a saving potential of approximately 5%. 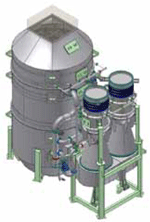 One way to fulfil the future regulations on sulphur emissions is to install an exhaust gas scrubber. This scrubber system use water to wash the sulphur out of the exhaust gas. Measurements have shown that SOx emissions are reduced with up to 98%. It is not only the sulphur which is reduced, also the content of harmful particles are reduced by approximately 80%.

Emission reductions in the magnitude of approximately 20% on CO2, approximately 35% on NOx and 100% on SOx are the potential of switching from diesel to LNG.

The choice of the right hull paint is essential to keep the resistance at a minimum. Modern anti-fouling hull paint with a low water friction has a fuel saving potential in the region of 3 to 8%.

The reduction of emissions is proportional to the fuel savings.

The waste heat recovery system utilises the heat in the exhaust gas from the main engine. The exhaust gas contains a lot of heat energy which can be transformed into steam. The steam can then be used for heating of the accommodation, cargo areas and fuel oil. The steam can also be used for power generation in a turbo generator. Depending on the configuration, a waste heat recovery system can reduce the fuel consumption by 7 – 14 %.

The formation of NOX emissions can be reduced by lowering the temperature in the cylinder liner of the main engine. One way of lowering the temperature is to recirculate some of the exhaust gas. Some of the exhaust gas is mixed with the scavenge air so that the oxygen content is reduced together with a lower temperature in the combustion chamber. Measurements have shown that this technology have a potential of NOX reductions of approximately 80%.

By using an optimised cooling water system it is possible to save up to 20% of the electrical generated power, corresponding to approximately 1.5% reduction of the total fuel consumption. Studies show that the resistance in the cooling water system often can be reduced. When the resistance is reduced smaller pumps can be used and thereby saving up to approximately 90% of the power needed for pumps.